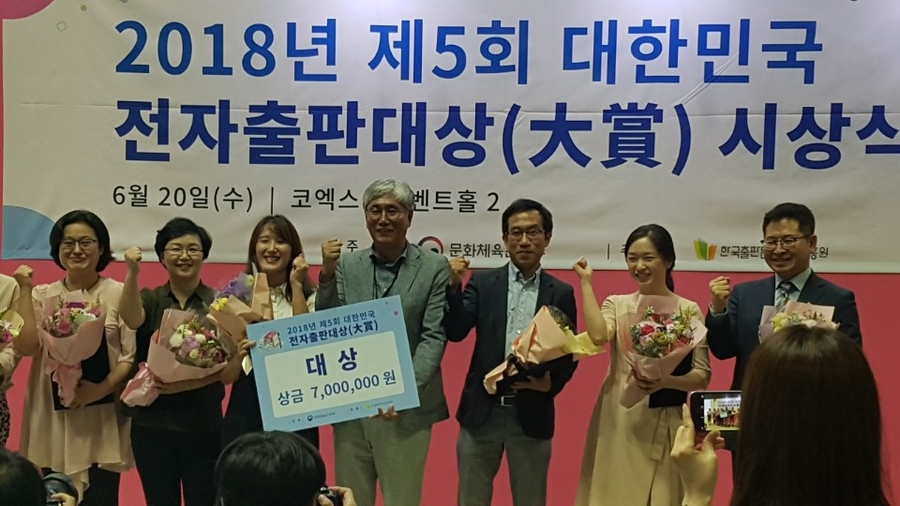 Scientific concepts to learn enjoyably through an augmented reality system

‘The 5th Korea Electronic Publishing Grand Prize in 2018’ is a contest exhibit, hosted by Ministry of Culture, Sports and Tourism and sponsored by the Korea Publication Industry Promotion Agency, with a purpose to promote the development of the e-book industry and spread the digital culture. A total of 107 works were submitted, and a review committee composed of experts in the publishing and the related academic circles presented awards to companies which showed plans with vivid and various characteristics of the electronic publishing, various experimental spirits, and technologies.

The ‘AR Science expedition’ of D&P Corporation is an interactive App book designed for elementary school students to learn necessary scientific concepts enjoyably through augmented reality system. The table of contents and composition of ‘AR Science expedition are as follows. △Our life and substances △Use of magnets △One living of animal △Changes of earth’s surface △Life of animal △Stratum and fossil △Liquid and gas △Character of sound △Volcano

The highest scored sector that D&P Corporation received at the 5th Korea Electronic Publishing Grand Prize in 2018, was technology. D&P Corporation developed an App book through their own augmented reality poster technology, which offers its users new experiences. Even in terms of UI/UX, the App book is composed of contents conveniently, using the augmented reality technology which revolves 360-degree, so that users can use contents while moving around.

The plan sector of the ‘AR Science expedition’ is also noticeable. Compared to that real scientific experiments are limited in terms of cost, space and time, the ‘AR Science expedition’ helps easy science experimental experiences. It can maximizes the learning effect of the contents related to learning because it provides information variously in the multimedia form. It proceeds further with users’ direct touch and control, which helps users to understand scientific concepts interestingly. Their planning ability that composed the contents to use a paper book and an e-book at the same time, is remarkable.

Like this, the ‘AR Science expedition is a content in various forms, so it is possible to proceed in various forms such as general book stores, online stores and etc., which was a reason that it received a high score in the popular appeal sector. Jeon Yunyong, the CEO of D&P Corporation said, “Since overseas buyers pay high attention on this content, it has high potential that this will be exported to at least 3 countries within this year,” and “it is now under a discussion that we will export this through the Thailand/Vietnam business consultation.” He continued to say, “Now, we are proceeding export contracts with South American Books in Thailand and GramMedia Group in Indonesia, and we’ve already concluded a contract with High-tech Limited in Guangzhou, China.

Meanwhile, the “I” of Hansolsoobook, which won the Grand Prize(the prize of the Minister of Culture, Sports and Tourism) among awarded works at the Electronic Publishing Grand Prize in 2018, was a project produced by D&P Corporation, which resulted that D&P Corporation was recognized for their technology in many aspects. D&P Corporation is constantly proceeding contents that integrate e-books and augmented reality boldly, and devoting to developing new fusion and compound contents.